Recognized master of bioenergetic and informational correction Author of unique methods of diagnostics, health correction and straightening out of complicated situations
Contact Me

Valery Kustov is a legend of alternative medicine

Healer to whom the powerful people apply

The reputation of Valery Kustov is irreproachable for many tens of years of his work: he deserved respect of the patients, recognition of the colleagues

Which help I can provide

Help when the methods of official medicine do not suit you

In my practice I had the cases of healing the patients in such situations when official medicine had not been able to help. The patients had such rare and uncommon diseases as dropsy of brain, hemolacria, cryoglobulinemic vasculitis, various deviations in development and age-dependent complexes of ailments. My abilities allow not only alleviating patients’ sufferings, but in some cases completely relieving them of an ailment.

A complicated state of affairs, a hard period in life

The bioenergetic influences are able to change the progress of events in such a way that a person has an opportunity not only to stop and rest, but to look back, perceive what happens, square his shoulders and relieve himself of the burden which becomes unbearable. My experience allows me to clearly see the situation and provides capabilities of its correction and reprogramming.

Determining the reasons for incurable hemolacria state of a 15 year old girl, treatment and health stabilization. The girl experienced intensive bleeding from eyes, ears, nose and felt heavy pain in her head, acute pains in her body, sickness and fatigue. 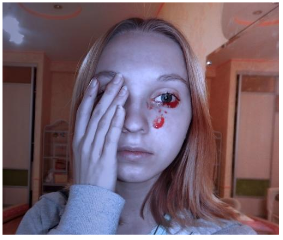 Analyses were normal and specialists supposed that bleeding was typical of teenagers because of intense growing - up.
Parents became optimistic and bleeding became weaker and rarer in the spring and summer.
However in September, 2016 the symptoms resumed on a new scale: her eyes started bleeding.
The girl experienced intensive bleeding from eyes, ears, nose and felt heavy pain in her head, pain closer to eyes and stuffiness in ears. She also suffered from acute pains in her body, sickness and fatigue. Bright light was not good for her and she stayed in the dark room until she felt better. After several blood tests hematologist excluded blood disorders and Von Willebrand Disease. On November 16 Anastasia had bleeding from 06:30 a.m.- 06:00 p.m. and acute pains in her body.
Thefirst visit to doctor took place on November 25.
Valery Kustov treated the girl touchless working at the distance of 1.5 - 2 meters from her for half an hour.
During the second visit the girl had acute pains in her body and this symptom was also over after 1 hour of treatment.
Anastasia made totally 7 visits for 5 days. After 5-7 sessions bleeding stopped.
Then her organism was restructuring from January to June, 2017 and she had short episodes of bleeding from time to time. 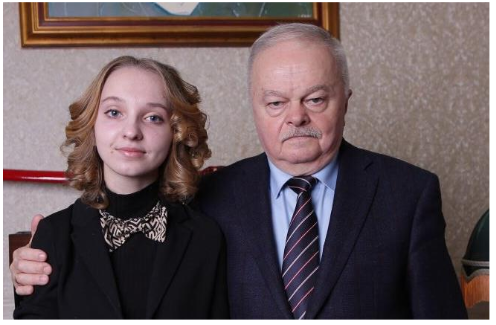 She made visit to Valery Kustov again on March, 24 and had 5 sessions as planned. Since July, 2017 up to now she has no bleeding.
View video about the case 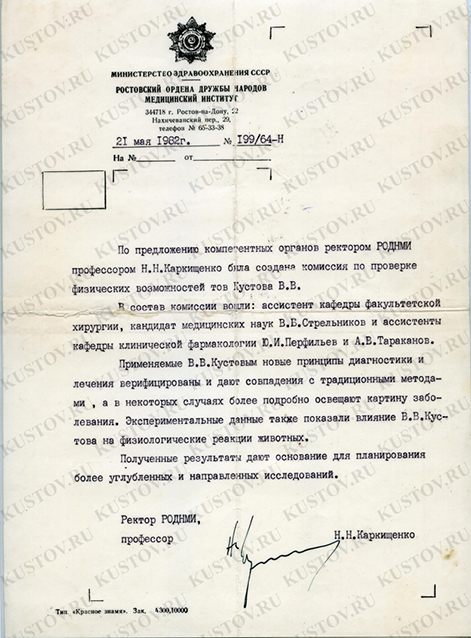 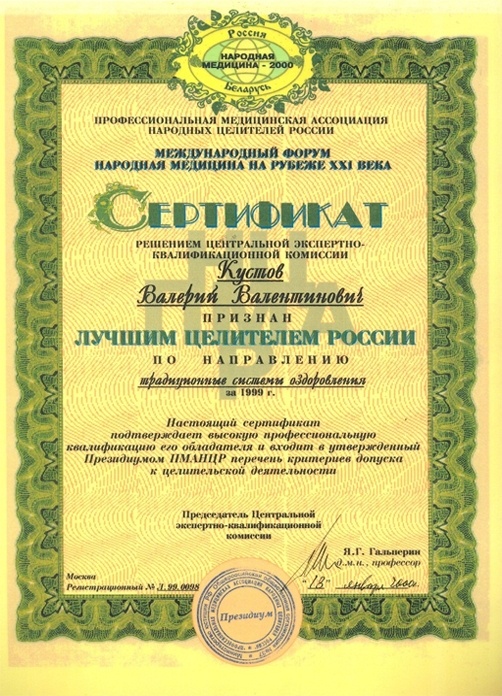 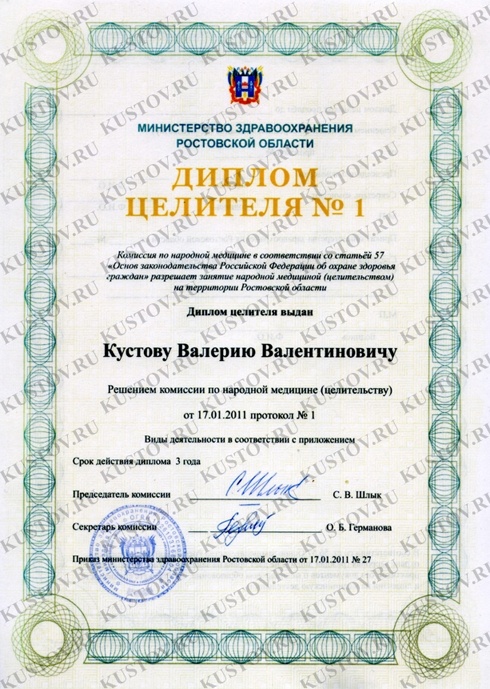 If you have medical documents (a diagnosis, medical opinion), attach their scans or good quality photos as well (i.e. this can be done through the application form). A consideration of the letter and a reply may take up to 2 months.
Requests to email are accepted only in Russian. The reason for the refusal to accept is not explained.

We do NOT review the applications related to cancerous diseases, mental disorders, diabetes, psoriasis, vitiligo, ICP, disseminated sclerosis, alcoholic, gambling and drug dependence and requests to train in his methods of work

State your concern or problem in as much detail as possible. If you see fit, attach the documents. Enter your name, email or phone